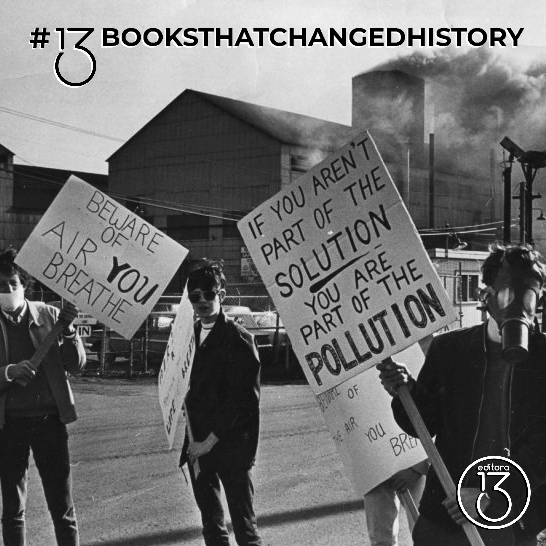 The second proposal of our series 13 books that changed history marked a turning point in the way in which society understood its relationship with nature, awakening the interest of the first by the second, laying the foundations of environmental awareness and opening the eyes to entire generations about a problem that, today, is more present than ever.

Silent Spring, published in 1962 by marine biologist and zoologist Rachel Louise Carson, has as its central theme the terrible effects of the use of pesticides and other chemical elements in the environment. Considered one of the first informative books on environmental impact, Silent Spring approached the public, in an objective and rigorous way, but also clear and understandable (loaded with a multitude of real examples), the reality of environmental deterioration caused by the production and use of DDT, the chemical pesticide that the author paid the most attention to. Carson also denounced that these poisonous chemicals end up accumulating in the food chain, which implied terrible risks to the health of both people and other animal and plant species, destroying flora and fauna.

Rachel Carson’s complaint did not go unnoticed: quite the contrary, it angered many powerful people. The American chemical industry began a terrible campaign of defamation against the scientist, and threatened the main newspapers and other media of the time to withdraw investment in advertising in case they published texts favorable to Carson’s work.

But its positive impact was much more powerful: it is, without a doubt, a benchmark for raising awareness about the consequences of human activity on the environment. In fact, Carson’s text is at the origin of environmental movements and for the conservation of nature, since it is not only a research work focused on data analysis: it holds important contributions and arguments that link empirical data from the field of natural sciences with readings and critical interpretations traditionally associated with social sciences, offering a global vision of the phenomenon of pollution, its causes and, especially, its consequences.

Silent Spring is a work that is as current today as at the time of its publication, because it reminds us that we have, in the author’s words, “a fateful power to alter and destroy nature.”