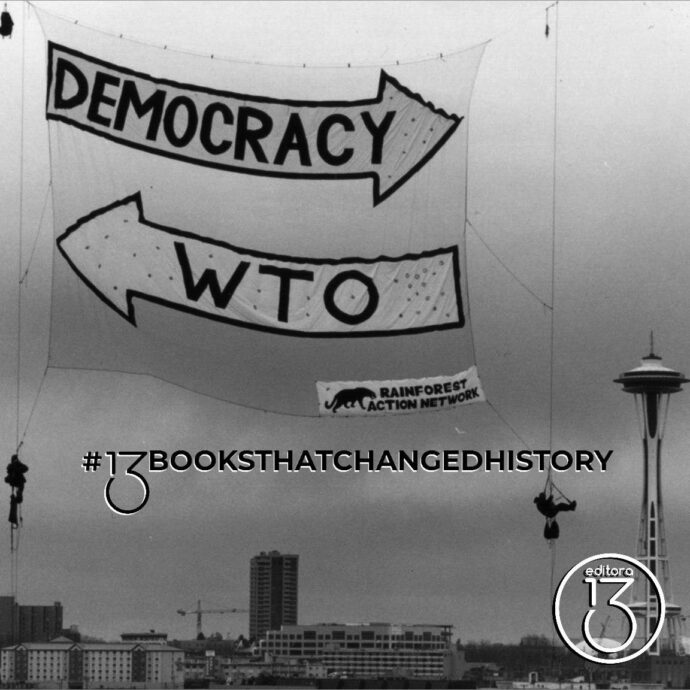 We could not make much progress in this series of 13 books that changed history without mentioning a contemporary classic that, 20 years and many editions (and translations!) after its publication, continues to be a reference text for several generations. A work that marked a turning point in our vision of the market, brands and the effects that marketing, branding and advertising have on our way of consuming (and by extension on our lifestyle and the way in which we relate to the planet and its inhabitants), and that it arrived at the right time to serve as a theoretical base – but above all, as an argument – for thousands of activists.

No Logo (Naomi Klein, 2000) offers, throughout its more than 500 pages, a deep and thoroughly documented analysis of the evolution of the role that multinationals and brands play in our daily lives, showing how, gradually, both in the people’s public and private sphere is increasingly being occupied and dominated by these agents. From the landscape changes (and people) suffered in the Canadian neighborhood where the author was raised as a result of the proliferation of large areas and establishments belonging to chains, to the terrible consequences that globalization has in the looted territories that allows, with its raw materials and exploited labor, for the West to have access to the wide range of products and services that advertising turns into necessities (through the loss of basic rights of a good part of the citizenship, the worsening of labour conditions, environmental degradation and loss of biodiversity, among many others). Klein offers in No Logo a catalog of horrors sponsored by the big brands and multinationals that are behind them, but also an alternative to get out of this dehumanizing machinery of production and consumption that globalization promotes.

With this text, her author, journalist by profession and activist, became an international reference for the anti-globalization movement, as well as a prolific writer and disseminator: No Logo was followed by Fences and Windows (2002), The Shock Doctrine: The Rise of Disaster Capitalism (2007), This Changes Everything: Capitalism vs. the Climate (2014) and Resisting Trump’s Shock Politics and Winning the World We Need (2017).

Thus, No Logo was the first of a series of books with which Naomi Klein, with a direct and understandable, but tremendously incisive style, offers a critical interpretation of the reality we are living without giving up hope, proposing alternatives for improvement, and showing that we still have time to change things.