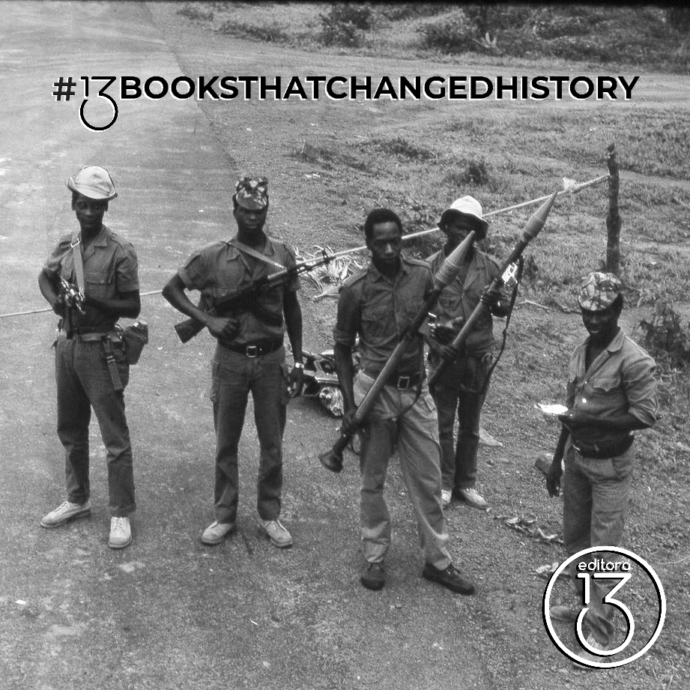 For the sixth proposal of the series 13 Books that changed history, we recovered an essential title of anticolonialism, understood in a much broader sense than mere independence: Les Damnés de la terre (in English, The Wretched of the Earth), by Frantz Fanon, proposes a concept of anticolonialism based on the necessary process of self-emancipation and identity claim of a people.

Frantz Fanon, a psychiatrist born in the French colony of Martinique, is one of the greatest exponents of anticolonialism. His work, although not very extensive (due in large part to his premature death), had an enormous impact and influence on the revolutionary movements of the mid-twentieth century. Among his texts are Peau noire, masques blancs (1952, translated into English as Black Skin, White Masks) or L’An V de la révolution algérienne (published in 1959, and translated as A Dying Colonialism, and later republished in french as Sociologie d’une révolution in 1966); The Wretched of the Earth was his last work, published by Jean Paul Sartre shortly after the author’s death, in 1961.

In this text Fanon starts talking about violence (and it is true that it plays an important role in this work), which he considers necessary only when it is a “wise and prudent” violence, exerted by the group, because for the author, only this kind of violence, understood as a way of raising awareness by the people, can be effective against colonialism and imperialism. It is, therefore, a strategic violence, very focused and exercised with a specific purpose: the liberation of the colonized people. Next, the author explains what happens after this exercise of violence, when the people are finally released, clarifying that the greatest danger at this stage is that the bourgeoisie and other powerful classes jeopardize the (potentially prosperous) future of the country looking for short-term personal benefit, maintaining ties with developed countries. Fanon warns of this possibility, and proposes what he considers the only possible way to escape from this danger: the collaborative construction of a culture of its own that will be recognized and claimed before the rest of the world.

The Wretched of the Earth is, for all that , a song for the activation by the citizens, a call to mobilization, to the involvement of the “ordinary people” in the processes of change. It all begins with awareness, with the development of a critical attitude that allows us to understand that the struggle for rights and freedoms cannot be left to anyone (or governments, or privileged classes, or powerful estates) because, in words of the author, “the magical hands are not, in short, but the hands of the people.”