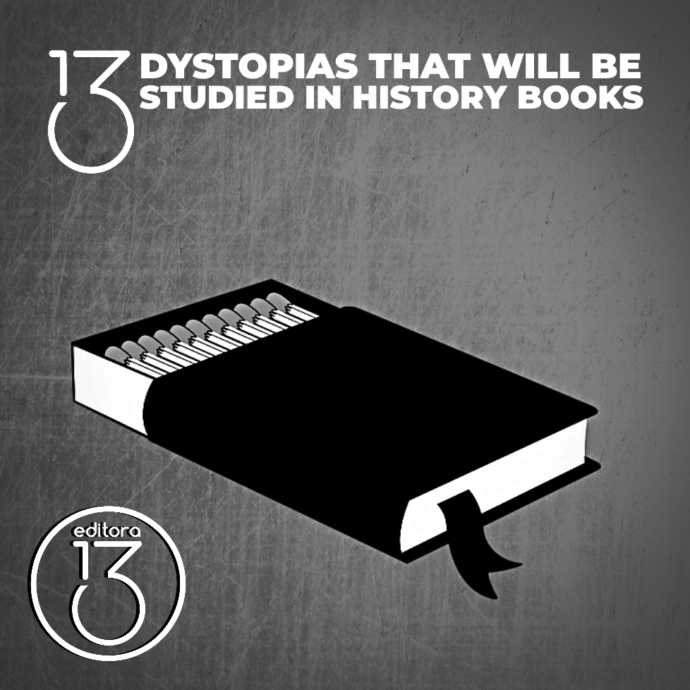 Little remains to be said about the fourth proposal in this series of 13 Dystopias to be studied in history books, a classic among the classics of the dystopian genre. It is a work that revolves around an idea maintained by many authorities throughout history: that books are dangerous because, as a tool that allows us to expand critical awareness, they can motivate free thinking, and with it, disagreement and opposition. The title is well known: Fahrenheit 451, by Ray Bradbury.

The novel’s title, as is well known, refers to the temperature at which paper burns (451 degrees Fahrenheit, equivalent to about 232 degrees Celsius). Fahrenheit 451 tells the story of Guy Montag, a firefighter specialized in burning books, who, one day, raises a certain doubt about the nature of his work, the effects it has on his own happiness and the ethical repercussions of it. In a context in which books are banned by the government itself, Montag, after deep reflection, decides to join a group of resistance workers who work to keep the content of the destroyed texts alive, through memorization and their subsequent oral transmission (thus becoming “human books”).

Fahrenheit 451 is not the only literary work in which he realizes the deep fear that culture in general (and books in particular) arouse in authoritarian regimes. However, the institutionalization of hatred towards books that Bradbury relates through the creation of a body of firefighters specialized in the burning of copies is one of the notable elements that identifies this work as dystopian fiction.

Ray Bradbury (1920-2012) started writing when he was very young. Self-taught, throughout his long and productive career he wrote novels, tales, short stories, poetry, screenplays and even non-fiction works. Although his writings respond to different themes, Bradbury’s work is always covered by the same patina that gives it a certain coherence: that of anguish, both social and metaphysical in nature, that the author associated with the sign of his times. Times that, for Bradbury, were characterized by extreme individualism; for the loss of contact with tradition (in the most cultural sense of the term); and by hyper automation. The dystopian society created in Fahrenheit 451, in which the cultural heritage disappears and the book is the recognized enemy, is the best reflection of the author’s fears.

The most obvious historical antecedent of Bradbury’s work on book burning is that of Nazi Germany, under the command of the German National Socialist Workers Party. These burnsing took place, especially, throughout the year 1933. For several months, thousands of books by authors considered “dangerous” (Marxists, anarchists, Jews, pacifists, or simply opponents of the regime) were cremated in public squares, with the approval (and sometimes the collaboration) of the citizenry, leaving for posterity devastating images that registered these acts of cultural genocide.

Thus, the massive burning of books (and other attacks on the publishing field and on literary production) is one of the tools most used by totalitarian systems, repressive regimes, anti-democratic movements and ideological fanaticism in general. From the burning of academic texts launched by King Qin Shi Huang in 3rd century BC China, up to the burnsing carried out by the Islamic State almost in our days, passing through the burning of Bib-Rambla in Granada by Cardinal Cisneros, the ones launched by Franco during the Spanish Civil War, or those that followed Pinochet’s coup d’état in Chile or the Revolution of ’43 in Argentina. All these terrible chapters of our history render account to what extent the book is an instrument of formation, awareness and activation (therefore, of liberation) for those who read it. And that is why totalitarianisms see it as one of their greatest enemies.