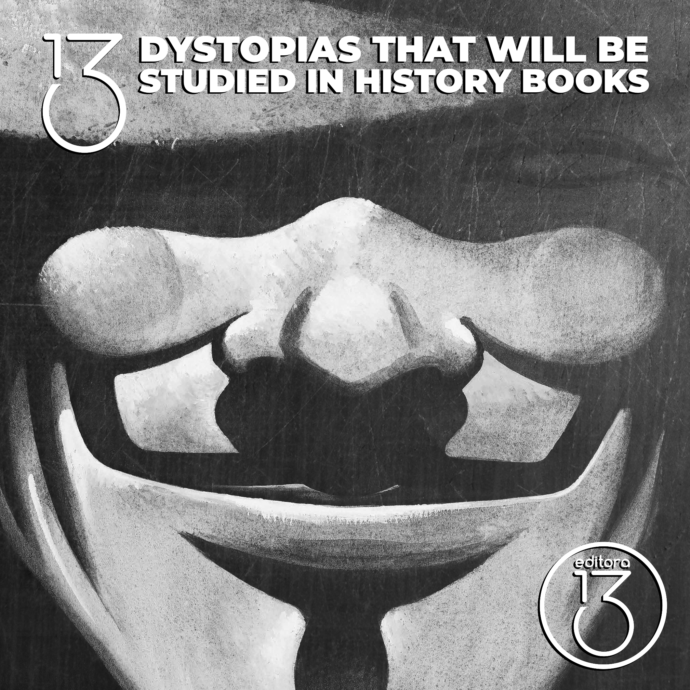 The ninth work proposed within the framework of this series of 13 Dystopias That Will Be Studied in History Books involves a change of format with respect to the previous titles. Finally, the graphic novel increases this list of great works of the dystopian genre. Thus, today we want to propose a title to which the popular imagination of the late twentieth and early twenty-first century owes much, both aesthetically and thematically: Alan Moore’s V for Vendetta, with illustrations by David Lloyd.

V for Vendetta places us in Britain during the 90s: specifically, during an alternative 90s that entailed, at the time the series was published (during the 80s), a dystopian future not necessarily probable, but certainly possible. In a context of global destruction due to nuclear war, the country is governed by a totalitarian fascist party, at the command of a state divided into five major sections: The Head (the administration), The Eye (the one who sees, the cameras), The Ear (the one who listens), The Nose (the group in charge of investigation) and The Finger (the police, executor). A whole structure generated around the control of the population, which shows its most brutal face in the concentration camps in which people who belong to groups considered dangerous or inappropriate by the system (socialists, Hebrews, homosexuals, non-Catholic people, etc) are locked up. To this control and punishment system the propaganda machinery is added  (which besides generating content related to the regime, controls and censors any artistic or cultural manifestation that it considers inappropriate). In this framework, an unknown person covered with a mask with the face of Guy Fawkes (leader of the gunpowder conspiracy), known as V, starts a hunt to catch the main leaders of the regime, while developing a symbolic fight against the system by means of a series of actions that begin to generate chaos, and which will culminate in an attack against the British Parliament, thus completing the plan launched almost 400 years earlier by Fawkes.

Alan Moore (1953) is one of the greatest references in the history of the graphic novel. British of origin, he began drawing from a young age, although he soon decided that he preferred to write scripts. In both facets, that of draftsman and that of writer and screenwriter, he always maintained a common premise: the markedly critical and brave character of his production. Thus, Moore’s work is consistent with his own way of life and his actions on a personal and professional level, as he was one of the first authors to protest the working conditions that magazines imposed on writers and cartoonists, mobilizing other artists and breaking contracts with various publishers throughout his career for this reason. Clearly anarchist in thought, Moore’s commitment appears between its pages in many of his works, and especially in V for Vendetta. A work in which the author tried to understand and show, with the help of David Lloyd (1950) and in the latter’s words, “why and how a society is corrupted”.

Due to the evident referentiality of the work itself, the first link between V for Vendetta and the reality that comes to mind is the already mentioned 1605 gunpowder conspiracy, a plot orchestrated by a group of English Catholics who wanted to assassinate the king James I and his friends, representatives and main bulwarks of Protestantism in England. At the head of this failed plan was Guy Fawkes, who “gave” his image to V throughout the graphic novel, and more recently, to the members of the Anonymous collective (a reappropriation of the image of this iconic historical character which probably had a lot to do with the film adaptation of the novel, made in 2005).

But without a doubt, Moore’s great inspiration when writing the pages of V for Vendetta was the Margaret Thatcher government and the Thatcherist policies that were in force between 1979 and 1990 (period in which the publication of the first numbers took place. of the novel, between 1982 and 1985). The fascist and repressive state proposed by the authors is an undoubtedly exaggerated, but easily identifiable version of the Tory government of the time. The implantation of an ultra-capitalist economic model that destroyed the industrial and mining sector, leaving thousands of families without sustenance; the destruction of houses and the condemnation of the working class to be forgotten in marginal neighborhoods that functioned as ghettos; the impulse of the nuclear program; loss of life in senseless war conflicts such as the Falklands War; Economic rationalism or hard-core conservative social policies were the main legacy of a political period whose consequences are still present in a country that, for Moore, “was turned against itself” due to the economic policy imposed by Thatcher. Particularly critical of this political period, Moore knew how to channel his feelings of discontent and frustration through a graphic novel that still inspires thousands of activists around the world today.