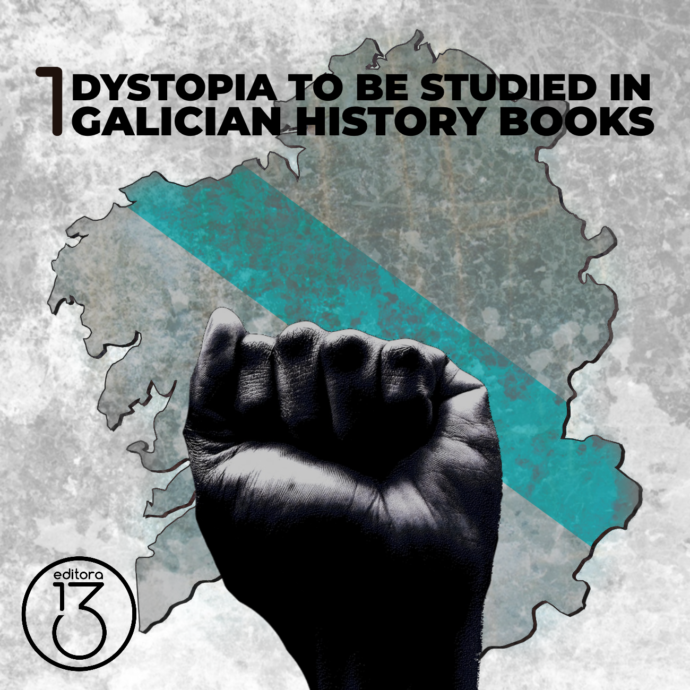 Today, July 25, we take advantage of the celebration of Galician Motherland Day to make a small stop on this path that we began to travel in the month of May, and that leads us to review some of the most significant titles of the dystopian genre. Or, rather than a stop along the way, we could talk about a much more specific proposal that transfers some of the most frequent themes of the dystopian novel (alienation, social inequality, curtailment of freedoms and rights, hypervigilance) to the Galician reality: Ellipsis and Other Shadows, by Xosé Luis Méndez Ferrín.

In Ellipsis and Other Shadows, Méndez Ferrín performs what is known as a negative utopia or uchronia, as he presents an alternative reading of history, using real events as a basis, and exploring another possible future. Thus, this work is made up of eight stories (one more than in its original edition in 1974, since the one that gave its title, Ellipsis, had been eliminated by Francoist censorship). Through them, the author proposes a prologue, a closing and six well differentiated central stories that serve as an excuse to talk about the class struggle in a context, that of Franco’s Galicia, in which the political situation is united by the weight of the most reactionary cultural tradition, one that is on the side of the most powerful. A struggle in which the production systems are in the hands of a few powerful and regime-related families that overwhelm the rest of the citizenry, the working class, which is made up of nothing but neighborhoods, former schoolmates, family members or employees. A society in which personal closeness and direct contact between oppressors and oppressed are nothing compared to the enormous ideological distance and social gap that separates them.

Xosé Luis Méndez Ferrín (1938) is one of the most relevant authors in contemporary Galician literature. Philologist by training, writer and teacher by profession, his political commitment has always been very present both in his life and in his work, in which nationalism has a fundamental weight. He took part in the creation of the UPG (Galician People’s Union) in 1964, its proletarian line (UPG-lp, later the Galician Party of the Proletariat) in 1977, and the independence organization Galicia Ceive in 1979. He is currently a member of Galician Popular Front. Regarding his literary production, his contributions to poetry, narrative, or criticism, among other genres, led him to deserve a multitude of literary awards (he was even proposed to the Nobel Prize for Literature) and to preside over the Royal Galician Academy for a short period of time, which contributed to making visible both his personal work and his Galicianist, progressive thinking linked to the revolutionary left.

Through this reading of the Galician social reality of Francoism (with many points in common with the current one, after more than forty years of democracy), Ellipsis and Other Shadows offers a valuable and hopeful lesson: resistance is never in vain, since sometimes what seem like immovable constants turn into historical cycles with a clear ending. It is then when whoever resists, wins.