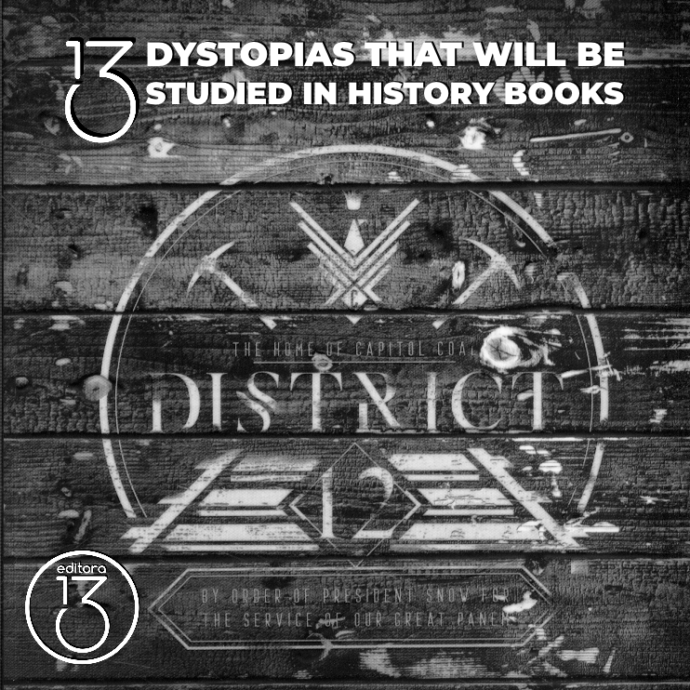 We reach the penultimate of these 13 dystopias that will be studied in history books with a recent series, initially conceived as a trilogy (in 2020 a fourth book was published, which recounts the events prior to the story of the first volume). Internationally known thanks to its successful film adaptation, it is one of the few proposals on this list designed specifically for a young audience: The Hunger Games, by Suzanne Collins.

The Hunger Games takes us to a possible future in which the territory known today as North America is renamed Panem. Panem is administratively divided into a capital and 13 districts. The capital (called Capitol), is the center of political and economic power. The districts are numbered from 1 to 13 based on their productive specialization within Panem (and therefore their wealth). Thus, District 1, specialized in the manufacture of luxury items, is the one that enjoys the greatest comforts, reaching excessive opulence. District 13, for its part, is specialized in mining and nuclear technology, which has a negative influence on its ecosystems and the quality of life of its extremely poor inhabitants. According to this system, every district must work to provide the Capitol, the maximum exponent of a totalitarian, unjust and unequal system. This situation of extreme subjugation meant that, years prior to the events that are narrated in The Hunger Games, a rebellion of the most impoverished districts took place (with District 13 at the head), which unleashed an internal war known as the Dark Days. As punishment for the uprising, and for a deterrent purpose, the Capitol destroyed District 13 (or so it declared to the remaining districts). To overcome these Dark Days, the Capitol launched an annual event that is broadcast throughout the territory of Panem, and that has a massive following. It is a competition in which a boy and a girl from each of the districts must fight with the 23 remaining participants, until only one person remains alive. This televised show is called The Hunger Games.

The events narrated in the original trilogy begin 75 years after the Dark Days, when Katniss Everdeen and Peeta Mellark are chosen by lottery to represent District 12 in the Hunger Games. Willing to return home alive, they launch a strategy that represents a challenge for the Capitol. Thus, Katniss becomes, almost accidentally, the symbol of a new revolution.

Suzanne Collins (1962) is an American novelist and screenwriter with a degree in Art and Drama. The Hunger Games is, without a doubt, the series that brought her international fame and put her name on the list of references in science fiction and dystopia of the 21st century. However, Collins already had experience in the field of children and youth sagas, as she is the author of the series The Underland Chronicles, composed of five volumes published between 2003 and 2007. The classical world and Greek mythology have a great influence on her work. The author herself stated that the main source of inspiration during the creative process of The Hunger Games was the myth of Theseus and the Minotaur. The idea of ​​the punishment exerted on a society for the alleged crimes committed by previous generations is perfectly reflected in this series. And, as in the myth of Theseus, it is the new generations, the children (in this case, of Panem), who must purge the sins of their ancestors, sacrificing themselves in a life or death struggle.

When the first volume of The Hunger Games was published, Collins recognized this influence of Greek mythology, and recounted how the story about one society forced to pay tribute to another was impacted by this story. However, it is not the only influence recognized by the author. Not forgetting the obvious references to the class struggle (present in almost all the works reviewed), the most contemporary influence is that of the reality show culture. Collins recognized that the name of the territory in which the events of the trilogy take place, Panem, comes from the Latin phrase Panem et Circenses (Bread and Circus), perfectly applicable to this fictitious government that hides the harsh reality of the poorest districts (and the shameful reality of the richest) offering all of them a spectacle as cruel and humiliating as it is entertaining. A mean way of diverting attention from social inequalities, injustices, misery and conflicts, deactivating the population, eliminating critical potential and, with it, the possibility of rebellion.