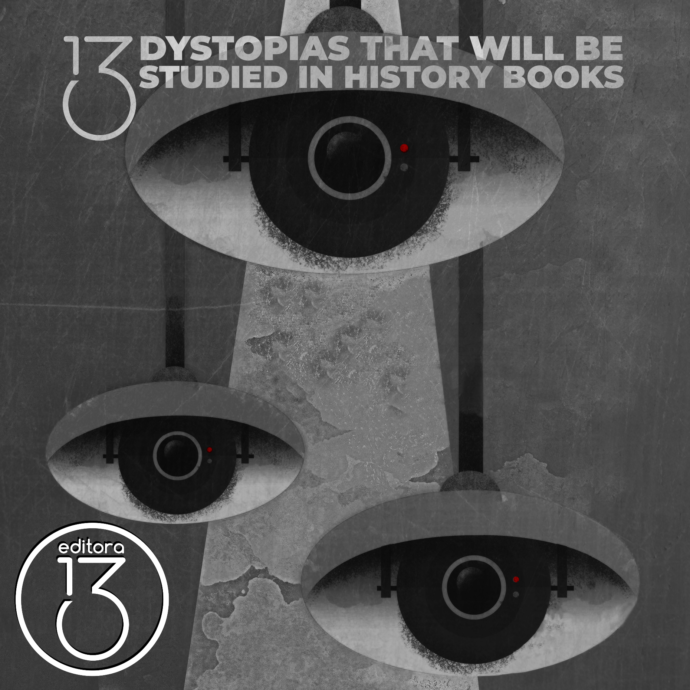 The work selected for this new installment of the series 13 Dystopias that will be studied in history books is, in addition to being one of the most recognized novels of the dystopian genre (and as such, a jewel of contemporary literature), a painstaking study on the nature of totalitarianisms. A text that, like so many of those proposed in this series, is so closely aligned with our current reality that it is almost prophetic: George Orwell’s 1984.

1984 places the reader in a political context in which control seems to be the absolute goal. Control of history corresponds to the Ministry of Truth, one of the organs (together with the Ministry of Peace, the Ministry of Love and the Ministry of Abundance) in charge of maintaining order and guaranteeing the fidelity of citizens to the Party, headed by the ubiquitous Big Brother who watches over everything. Winston Smith, the protagonist of the play, works in this ministry. Smith’s mission is to “touch up history” by manipulating archived documentation, to ensure that every event has records that demonstrate the consistency of past history with the current account of the government. After years of manipulation, Smith understands his role within the Party. Aware of his contribution to the Party’s totalitarian machinery, Smith becomes part of the resistance, something extremely difficult in a society in which dissent is easily identifiable by the government due to the complex system of control established.

Orwell’s case is one of those in which the experiences of an author (from the very birth) have a crucial impact on the development of his or her literary work. Eric Arthur Blair (the author’s real name) was born in so-called British India (the territory currently composed of Burma, Bangladesh, Pakistan and India itself, and at that time belonging to the British crown) in 1903. Being very young he settled with his family in the metropolis, and began his training in some of the most prestigious educational centers in the country. Unable to pursue university studies for financial reasons, after completing compulsory education he decided to join the Indian Imperial Police in Burma, position he held for 5 years. It was long enough for the author to discover the horrors of imperialism, abandon the force and decide to return to England. This disastrous (although clarifying) experience was translated into the work Burmese Days. Back in the pre-Great Depression context (and in the years that followed), Orwell learned first-hand about the hardships caused by poverty and developed a clear class consciousness. After living between London and Paris for several years, jumping from precarious job to precarious job, and with health problems, he was forced to return to his family’s home. This experience, which woke him up to socialism, had also a literary reflection in the piece Down and Out in Paris and London. It was his socialist commitment that led him a couple of years later to participate in the Spanish Civil War, joining the ranks of the republican side (specifically, he was part of the Marxist Unification Workers Party, a minority group that did not enjoy the sympathy of the USSR). His position was also clear in World War II, as a member of the Home Guard force, in charge of supporting the British Army against Nazi troops. A position consistent with his firm opposition to totalitarianisms, the central theme of some of his most famous works and, specifically, the one we are dealing with here.

The clearest referent when looking for a parallel between the society imagined by Orwell in 1949 (the book’s year of publication) and the reality is undoubtedly Nazism. But it seems that another of the chapters of the story that could have inspired the author at the time of writing 1984 was an apparently manipulated trial that took place in the USSR in 1936, and that resulted in the shooting of a series of members of Stalin’s Communist Party, accused of participating in an alleged international Trotskyist conspiracy. In this tragic episode, Orwell identified some of the defining elements of the same totalitarianism that Nazism displayed (malicious or interested allegations, forced confessions, elimination of dissent, limitations on freedom of expression and action, or rewriting of events in order to adapt them to the interests of the regime, among others), as well as the Francoist ideology that he himself had fought during his stay in Spain.

However, although the events reported in 1984 have numerous real references prior to its writing, it is by rereading it in a current key that we find the almost prophetic potential of the work. 1984 already delves into the idea of a society controlled by means of compulsory adherence mechanisms (in the case of the novel, by political mandate; currently, by a kind of social pressure that leaves out those who choose not to succumb to power from the mass media and social networks). Mechanisms that, in addition to numbing citizens through entertainment, function as data collectors that allow the manipulation of individuals and, with them, of societies.